Yesterday, workers across the UK went on strike against poor pay and conditions at major hospitality chains and ‘gig’ employers. 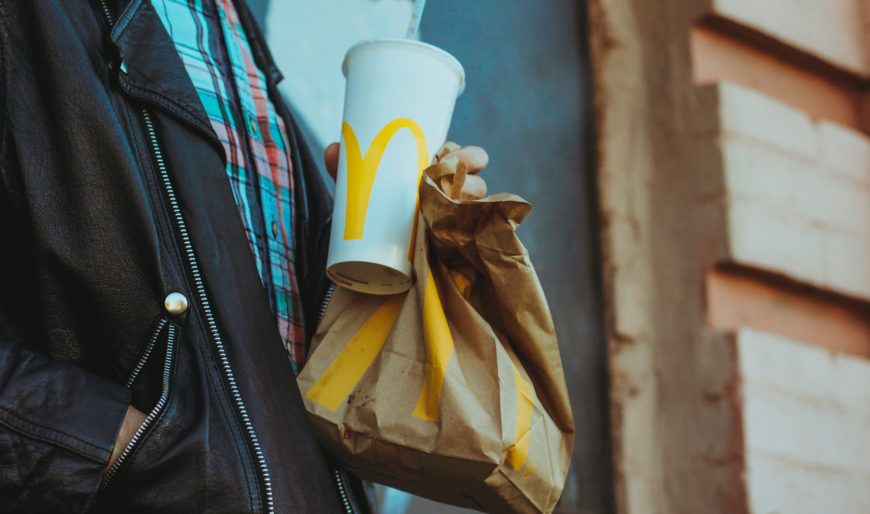 In a show of solidarity across the industry, Uber Eats, Deliveroo, McDonald’s, TGI Friday’s and Wetherspoons staff held protests in major cities up and down the country, from Brighton to Glasgow.

McDonald’s, TGI Friday’s and Wetherspoons workers were demanding fair pay and conditions, including recognition of their trade unions and an end to zero-hour contracts.

“The days of poverty pay, insecure contracts and lack of respect for workers are numbered. A living wage of £10 an hour for all ages, security of hours, and our right to a union are the basic rights we are fighting for,” explained Lauren McCourt, a McDonald’s worker who recently spoke at the the Institute of Employment Rights’ Labour Party Conference fringe meeting.

Uber Eats and Deliveroo couriers logged off for the day to fight for £5 per delivery and at least £1 per mile. The two gig economy employers are reportedly in talks regarding a possible merger.

The day of action has been described as “unprecedented”. Not only was this the first time Wetherspoons workers have gone on strike in the history of the company, but the hospitality sector as a whole has traditionally proven difficult to unionise, and is largely staffed by younger people – a generation trade unions have found it more challenging to recruit. With McStrike, it’s beginning to look like those trends are taking a sharp u-turn, bringing to the fore a new wave of trade unionists who are fighting back against the increasingly precarious and exploitative jobs they are forced into.

And their voices are just the tip of the iceberg in the evidence against the government’s argument that workers want zero-hours contracts. A new study by economists Nikhil Datta, Giulia Giupponi and Stephen Machin has found that almost half of people in these roles want more hours and 30% have accepted the job as a last resort due a lack of alternative opportunities. Only 28% of 20,000 zero-hours workers surveyed said they were attracted to the “flexibility” of the roles.

Despite this, the employers of the strikers were unyielding. Wetherspoons boss Tim Martin described his workers are practicing “gunboat diplomacy” when interviewed by a Mirror journalist at a Conservative Party fringe event called “Making Work Pay”. The multimillionaire, who pays himself a wage of £324k a year and owns £33m in Wetherspoons shares, then went on to suggest that workers have a choice between a living wage and perks, saying: “What I think should be taken into account is the amount we pay in bonuses which – a lot of companies which have eliminated bonuses and other benefits and have then increased the rate per hour.

“So we could certainly do that and get to the level that is being suggested. But I think the scheme we’ve got with various benefits we’re talking about is better.”

One of the companies Martin may have been alluding to is Amazon, which was this week criticised for slashing its employee share scheme when it raised its hourly rate. The move reportedly means that some workers will be left even further out of pocket by the notoriously low-pay company. GMB General Secretary Tim Roache described the new policy as “robbing Peter to pay Paul“, levelling criticism directly at the company’s CEO.

“If Jeff Bezos – the richest man in the world – really wants to give hardworking staff a pay rise he should let them keep their share options as well as increasing their hourly rate,” he said.

(The company has also been criticised for considering putting its workers inside small cages, without a chair, for the duration of their shift.)

But the McStrikers also had influential leaders behind them. Shadow Chancellor, John McDonnell, was a surprise addition to the picket line at one of the demonstrations in Leicester Square. There, he told strikers the Labour Party was behind them and promised reforms to workers’ rights based on the Institute of Employment Rights’ Manifesto for Labour Law. These include the introduction of a living wage – which McDonnell said would be delivered in the first Queen’s speech, trade union rights for all, and a Department of Employment with the responsibility to roll-out sectoral collective bargaining.

He also repeated his support for the Manifesto for Labour Law at the Marx Memorial Library on Tuesday evening at an event where he spoke about The Economic Policy of the Labour Party. According to Twitter reports, he received a round of applause when he thanked the IER for delivering our influential report.

Elsewhere, recommendations strikingly similar to those contained in the Manifesto were made to the Department of Transport. The report, which was commissioned by the government, proposed that compliance with employment law should be one of the tests of whether a taxi or public hire vehicle operator is deemed to be “fit and proper” for a license. The Manifesto goes further in that our experts recommend that licenses and public sector contracts should only be available to businesses that uphold a broader set of labour standards, including adherence to relevant collective agreements.