Independent think tank the Institute of Employment Rights (IER) will launch a comprehensive package of labour law proposals - Rolling out the Manifesto for Labour Law - on Sunday 09 September at TUC Congress. 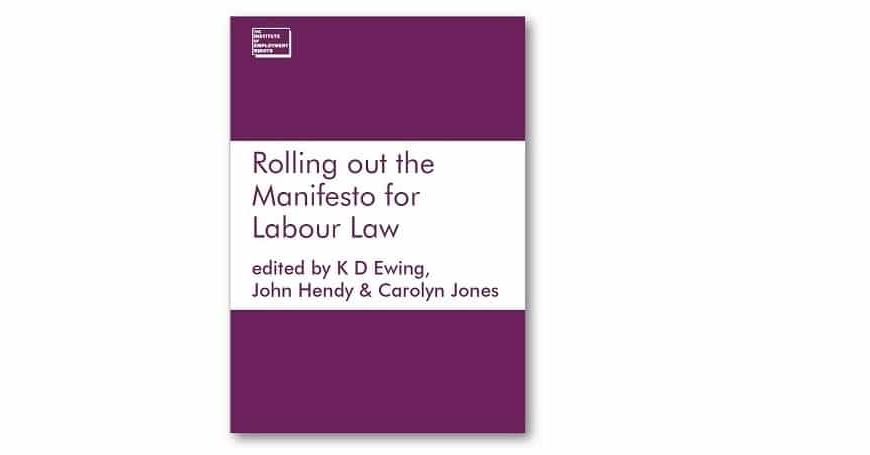 Shadow Chancellor, John McDonnell, and Shadow Secretary for Business, Energy and Industrial Strategy, Rebecca Long-Bailey, will speak at the event to welcome the proposals and outline how they will help the Labour Party to implement its 2017 Manifesto For the Many, not the Few.

John McDonnell welcomes Rolling out the Manifesto for Labour Law

Drawing from research into both domestic and international labour law, Rolling Out makes 25 recommendations for radical reform to end the growing scourge of insecure work, low pay and the lack of rights and protections associated with the gig economy, thereby transforming the world of work so that it benefits the many, not just the few

The report further develops the recommendations of the IER’s 2016 Manifesto for Labour Law, many of which were adopted in the Labour Party’s 2017 Manifesto For the Many Not the Few.

It was authored collaboratively by 26 leading lawyers and academics from across the UK, and edited by Professor Keith Ewing (Kings’ College London, IER President); John Hendy QC (Old Square Chambers, IER Chair); and Director of the IER, Carolyn Jones.

Please see full briefing for details of all 25 recommendations and the issues they seek to resolve.

Rebecca Long-Bailey welcomes Rolling out the Manifesto for Labour Law

“Today, the vast majority of workers have no say over their pay, conditions and the hours they work. Insecurity has fast become the norm and nearly four million people face insecurity at work.

The Taylor review was a missed opportunity to radically transform the current employment system that is no longer fit for purpose. At its core was the misconception that there is a trade-off between flexibility and security – that in order to fit work around their lives workers had to sacrifice their hard-won rights.

Predictably, the Government’s overdue response was just more empty rhetoric, with no real action to improve the lives of the millions of people in insecure work.

A Labour Government will transform the world of work, providing security, decent pay and equal rights for people from day one, including sick pay, holiday pay and protection against unfair dismissal. We will introduce a new Ministry of Labour to give workers a voice in parliament, sectoral collective bargaining to raise wages and conditions, and repeal dangerous anti-trade union legislation.

“We have worked closely with the Institute of Employment Rights, and welcome this new report that builds on Labour’s Manifesto and offers a practical plan to not only protect, but to improve upon, workers’ rights and ensure that the economy works for the many and not the few.”

“Poor pay, poor conditions and an increasingly unequal economy are the inevitable product of government policy over 40 years to destroy collective bargaining in the UK. The proportion of GDP going to wages has plummeted from 65% in 1974 to just 49% in 2007 – a figure that underestimates the depth of inequality because it includes CEO salaries at 386 times the National Living Wage. This is bad news for everybody – both the rich and the poor – and has severely damaged our economy, with low demand and low productivity. Inequality of power has excluded most workers from any say in the conditions under which they work. A reversal of government policy and a new set of labour laws are essential and urgent to reconstruct the world of work. By coming together as a society and encouraging dialogue between workers, employers and government, we can rebuild our economy and face future challenges from a place of strength.”

“Labour is not a commodity. This is the principle of international law underpinning our proposals. Workers too often feel treated like numbers rather than people, a problem that has been brought to light by multiple exposes and inquiries at major employers like Sports Direct, Amazon and Uber. It is labour law that has allowed this to happen and labour law that can bring it to an end. Our proposals bring UK law up to the standard seen in most other developed economies, particularly in Western Europe. From an international standpoint, the UK is unusual in its marginalisation of workers’ voice. The facts speak for themselves: Where industrial relations are strong, society is more equal and the economy more resilient and prosperous. When it comes down to it, the future of labour law is integral to the future of the UK.”

“The UK’s employment law framework is not fit for purpose. Britain needs a pay rise and our economy needs a boost. The best way to achieve both is to put more money into the pockets of workers and more investment into workplace innovation. The free market has failed. It’s time for change. Our Manifesto provides the pillars on which a sound economy and strong employment rights can be built.”

Rolling out the Manifesto for Labour Law will be launched on Sunday 09 September, 6.30pm (or end of Congress) at Charter 4, Manchester Central Convention Complex.

TGI Friday’s worker Lauren Townshend will share her story of working under the current framework of labour law and the difficulties she has faced creating a dialogue with an employer that has consistently cut her and her coworkers’ rights.

Refreshments will be provided.

The Institute of Employment Rights is a think tank for the labour movement and a charity. We exist to inform the debate around trade union rights and labour law by providing information, critical analysis, and policy ideas through our network of academics, researchers and lawyers.

We were established in February 1989 as an independent organisation to act as a focal point for the spread of new ideas in the field of labour law.