Home > News > Lauren’s story: “Young people don’t get discounted rent or food so why should they be paid so much less for doing the exact same job?”

Lauren’s story: “Young people don’t get discounted rent or food so why should they be paid so much less for doing the exact same job?”

Lauren Townsend, 26, who has led hundreds of her fellow TGI Friday's workers in a campaign against cuts to their employment rights, spoke to the IER about her experiences. 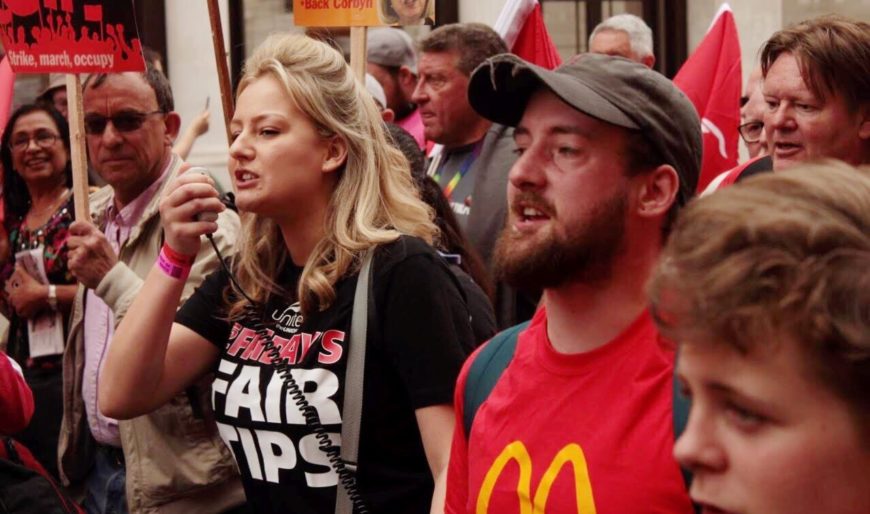 Read below about what working life has been like for Lauren and her colleagues and how implementing the IER’s recommendations in Rolling out the Manifesto for Labour Law could make our society fairer.

I’ve worked as a waitress for TGI Friday’s since my 18th birthday in 2010. Until this year, I was considered a model employee – I’ve got the pins on my braces to prove it! They even used pictures of me on the front of the menu and in their Christmas advertising! But this year I’ve found myself having to speak out against the employer I’ve been loyal to for so long.

For a company that calls us a ‘Fridays family’, it’s sad that they’re now so obviously putting profits before their people. They took away our time-and-a-half for working over Christmas and New Year’s. They cut staffing levels; got us to do our training unpaid and in our free time; and some branches got jobseekers to do “unpaid trial shifts” that didn’t lead to a job because there was never one available in the first place. They started taking our staff meals, forcing team members on 10-11 hour shifts to spend the equivalent of over an hour’s wage for lunch from the kitchen.

Kitchen staff are supposed to be on a higher wage, but as their pay has stagnated while the minimum wage has gone up, many of them are now on or close to the minimum wage. Plus, cooks often don’t receive the time-and-a-half rate for working over 48 hours. TGI’s use youth rates too, so someone doing the same job as me who is 19 gets just £5.90 per hour. Young people don’t get discounted rent or food so why should they be paid so much less for doing the exact same job?

In January, we were given just two days’ notice that 40% of waiting staff’s card tips – worth about £60 a week if you’re full-time – would be reallocated to kitchen employees instead. One girl at my store lost over £1,000 in 18 weeks because of this change – she has a mortgage to pay and kids to feed! We tried to complain and express our concerns but were ignored and belittled. TGI’s got a bit of bad press, but they just make out like it’s us that are greedy for not wanting to give up the little we earn to subsidise our colleagues’ poor pay.

That’s when we joined the BFAWU, and later UNITE when the unions decided to take joint action. We led a huge recruitment campaign at TGI’s that unionised over 250 workers in six months. Most of my colleagues are young and a lot of them had no idea what their employment rights were, nevermind what a union does or why they should join one. It’s no wonder we get exploited like this when the government leaves it down to us to enforce the law.

It’s now eight months into our campaign and we’ve had some big wins – we got our shift meals back and we now get paid for the time we spend training and attending meetings. But the law can’t protect us if it stays as it is. We need stronger voices at work if we’re going to be treated with any dignity, and that means better trade union rights and better protections for those who speak out against unscrupulous employers.”