Human Rights vs. Bill of Rights: What’s in it for workers?: Liverpool

The employment rights of individuals and collectives are discussed from the perspectives of politicians and lawyers. 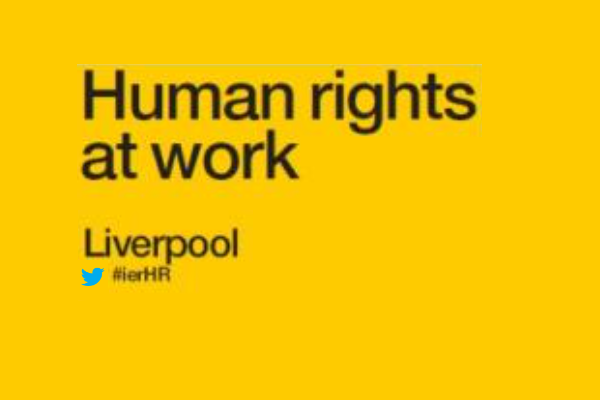 About the Conference – report by Bob Kelly

With impeccable timing, the Institute of Employment Rights (IER) held a conference on the issue of the Human Rights Act, a day after it was briefly mentioned in the Queen’s Speech. The conference chair, Carolyn Jones, recited the sentence with an attempt at an impression that came out sounding more like the Queen of Kirkby than a rich aristocrat! After Carolyn’s otherwise excellent introduction the conference speakers fell into two camps. Two speakers gave us a legal background to aspects of Human Rights Law and three speakers who, as well as some legal aspects, gave us a political context in which the laws existed.

Jo Seery from Thompsons Solicitors, a veteran of IER events gave her usual considered explanation of Article 6 – the right to a fair trial of the European Convention on Human Rights (ECHR). She started by explaining to the audience that the ECHR is different to the European Union courts and shouldn’t be confused, she then gave a background to the ECHR and then concentrated on Article 6 with particular reference to employment law. The article not only covers criminal courts, but civil hearings, including disciplinaries. There were two main aspects of law that have appeared in cases: those that are about access to justice around fees and whether they were disproportionate to denying an individual justice; and those around the right to have legal representation at a disciplinary. This second issue centred on the consequences of the disciplinary to the individual on their contractual rights and in carrying out their profession. Jo then spoke briefly about the Trade Union Act and thought that one aspect of the legislation that might conflict with the ECHR is the role of the Certification Officer and access to a public court. She finished with worries over a Bill of Rights being introduced that contain a hierarchy of rights.

Hannah Reed from the TUC gave us an update on the Trade Union Act, explaining what was removed from the original Bill. She then went on to explain how the TUC in its campaign against the Bill had built coalitions with Human Rights organisations to lobby the government over its proposals. She also explained that a number of leading lawyers who spend a lot of time defending the government and employers had spoken out against aspects of the Bill. She rightly labelled these people as ‘not just the usual suspects’. Hannah then explained areas of the Act that might conflict with the ECHR, such as the restrictions on the right to strike and picketing and the role of the Certification Officer.

Sandwiched in between these two speakers was Robert Knox from Liverpool University. Robert started by stating that he has problems with the Human Rights framework because it limits collectivism: human rights being about the individual as opposed to labour rights being collective. He went on to explain this using Antonio Gramsci’s modes of collective organisations from ‘The Modern Prince’. He gave a potted history of employment law from feudal times into capitalism and its early reluctance to grant collective rights until the Trade Disputes Act of 1906, which established the ‘Golden Formula’. This was extended during the Post-War settlement with trade unions who were then conceived as wider representatives of the working class and were allowed into the political arena. This changed with the election of a neoliberal Conservative government under the influence of Friedrich Hayek’s theories of individual liberty. Legislation was framed to keep trade unions in the ‘Economic- corporate’ sphere of influence in society. Robert then returned to the ECHR and in particular Article 11 to show through case law that despite being enacted during the post-war settlement, the ECHR has a neoliberal narrative. He finished by describing the ECHR as a dead cat in relation to collective rights.

In the afternoon session we were privileged to have another speaker from Liverpool University in Stefanie Khoury, who specialises in violations of human rights and corporate accountability. She started by talking about how corporations started to undermine trade union rights in the 1950s in the USA and then moved on to how developing countries and particularly Allende’s Chile started challenging the power of corporations at the United Nations. However, the UN shifted away from attempting to control corporations to dealing with individual countries. Corporations also used the ECHR to their own ends by arguing that they have rights too and should be seen as individuals.

In 1952, the ECHRs first protocol established rights to possessions and property, and in 1962 corporations became rights holders. By the late 1990s, the UN could not ignore a number of high profile cases of corporations violating human rights. In 1999, they decided to start an initiative for a ‘Global Compact’: a voluntary set of obligations on business which included human rights.

The UN appointed John Ruggie as a special representative to investigate human rights. He put together a set of guiding principles on businesses and human rights. The outcome was that the ECHR argued against binding standards on corporations and he embedded liberalism into his consensus framework that was adopted in 2011. In 2013, Ecuador with the support of 600 non-governmental organisations proposed binding obligations on corporations. Despite being opposed by Ruggie (who suggested this was madness) and the host nations of transnational corporations this was passed this year. At this present time it is being ignored by corporations and Stefanie’s conclusion was that all the Ruggie process had gained was to make corporations stronger.

Just before lunch we were privileged to have Professor Keith Ewing who, similar to Robert Knox, confessed from the start that he had misgivings about human rights law. Keith, however, used a different context to Robert. He described members of the Labour cabinet of 1950 being aghast by the proposal of the human rights convention, in particular Stafford Cripps, who exclaimed that the convention was ‘acceptable to those who believe in free markets and limited state intervention’. He used examples to show how political pressure had been used on the courts to interpret the ECHR. He also demonstrated how the right to assemble had been twisted to mean the right not join a closed shop; how the Demir case, which established the rights to collective bargaining, had never been used in Britain; and how decisions on prisoners’ voting had been ignored by the government. Keith then criticised ECHR as being a waste of time with regards to the TU Act (in contrast to Hannah Reed’s assessment) and that the Bill had been given over to human rights lawyers who had no knowledge of trade unions, check-off, labour law etc. He then questioned how many times the ECHR has been used in our favour. He finished by saying that the labour movement shouldn’t be relying on judges or courts and what we need is the election of a progressive government, then gave us a note of caution that the ECHR could be used against that progressive government.

Thanks to the IER and all the contributions for an excellent conference and I am looking forward to the next one.