This update is centred on the impacts of the Trade Union Act, which recently came into effect. 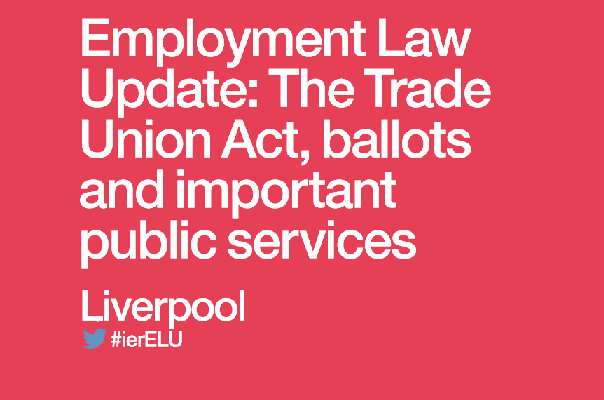 In March this year, the widely contested Trade Union Act (TUA) came into effect. Under the draconian new laws, trade unions must secure a 50% turnout on strike ballots, and those in so-called “important” public services must also have the support of 40% of all those eligible to vote. Other regulations designed to make it harder to take industrial action include doubling the notice period unions must give employers, shortening the window in which strike ballots are valid, and imposing more restrictive rules around picketing as well as the information unions must provide on ballot papers and reports.

While the unions are being wrapped in red tape, a campaign to break the labour movement is being established through other sections of the Act that serve to drain unions of resources and provide propagandist material for right-wing rags. Public sector organisations must now publish the cost of facility time but are not required to show the benefits – economic and otherwise – of a trade union presence. The Secretary for State also reserves the power to cap facility time through secondary legislation – i.e. without a parliamentary vote – in the future. The Certification Officer (CO) may now investigate allegations about union rule breaching from parties who are not union members, including organisations and individuals who are ideologically motivated to make vexatious complaints. Not only will the labour movement have to foot the bill for the CO’s new activities, but the government is now consulting on regulations to allow the CO to fine unions up to £20,000 for rule breaches, making the regulator ‘judge, jury and executioner’. Outgoing CO David Cockburn warned government in his final report that this new role may contravene the human right to a fair trial.

And he is not the only official to have criticised the Act. The Welsh Assembly has now published the Trade Union Bill, which repeals the TUA as far as it pertains to the Welsh public sector, arguing that the anti-trade union laws will lead to poorer employee relations. Elsewhere, the Labour Party has promised to repeal the Act within its first 100 days of office.
This conference will take a detailed look at the TUA, with our panel of lawyers, academics and campaigners updating delegates on what the new law requires of unions, as well as how it can be resisted and challenged. The Institute of Employment Rights will also provide further detail on its Manifesto for Labour Law, which aims to strengthen union and worker rights, and the principles of which have been adopted by the Labour Party.

Bob Simpson, London School of Economics & Political science
The impact of the law on industrial disputes: past experience and future possibilities

Les Skarratts, FBU
The Trade Union Act and the FBU fight back