Where is workers’ voice in Taylor’s Review?

It is doubtful if the changes proposed by theTaylor Review are anything like radical enough. 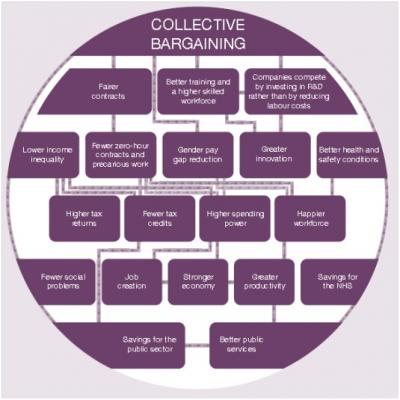 Changes to the law to protect the rights of those who work for a living are essential. It is doubtful if the changes proposed by the Taylor Review are anything like radical enough. They appear to ignore the fact that many gig workers are already ‘workers’ with rights to a number of employment rights. And the proposals go nowhere near far enough to deal with the problem of zero-hours contracts for the vast majority of the 2.7 million workers on such contracts.

But the Taylor Review ignores the most crucial step to restore decent work and a decent wage to Britain’s workforce: the reintroduction of sectoral collective bargaining in every sector of British industry. Sectoral collective bargaining is the settlement of minimum terms and conditions of work for the entire industry by negotiation between unions on behalf of workers on the one hand and employers’ associations on behalf of all the employers in the industry on the other. Those minimum terms and conditions can set the rules by which flexibility, security and a decent standard of life can be secured for all in the industry. The agreed terms can then be enforced in respect of all workers and on all employers in the industry. Of course, the minimum standards can be improved further by collective bargaining at enterprise level.

The Taylor Review refers to ‘sectoral strategies engaging employers, employees and stakeholders to ensure that people – particularly in low-paid sectors – are not stuck at the living wage minimum or facing insecurity but can progress in their current and future work’ but stops short of recommending the essential feature of negotiations between unions and employers. Without this element, workers are simply excluded from the process of determining the terms and conditions on which they work. This is one of the problems with the minimum wage and the Pay Review Boards: in both cases the outcome is determined by someone else.

Beyond restoring democracy to the workplace, sectoral collective bargaining has many benefits: delivering social justice and greater equality at work, raising wages and hence lifting people out of poverty, saving on the payment of benefits to subsidise low wages and increasing the tax take as wages rise, increasing demand in the economy, and compliance with the UK’s international legal obligations. Sectoral standards negotiated by employers and unions would also prevent good employers being undermined and undercut by bad employers, thereby halting the downward spiral into ever more extreme practices of exploitation.

But, in the context of the Taylor Review, sectoral collective bargaining setting the going rate for base pay, overtime, sick pay, holiday entitlement, family leave, and so on, is particularly appropriate to deal with the growing problem of the gig economy. Labour’s proposed Ministry of Labour would no doubt wish to establish a National Joint Industrial Council for: delivery riders and drivers, care workers, and  hotel and catering workers as the first phase of its roll out of sectoral collective bargaining.

These ideas (and more) are all explored in the Institute’s Manifesto for Labour Law published last year.