Home > Comment Post > Warning from history: On the 50th anniversary of the jailing of the Pentonville Five 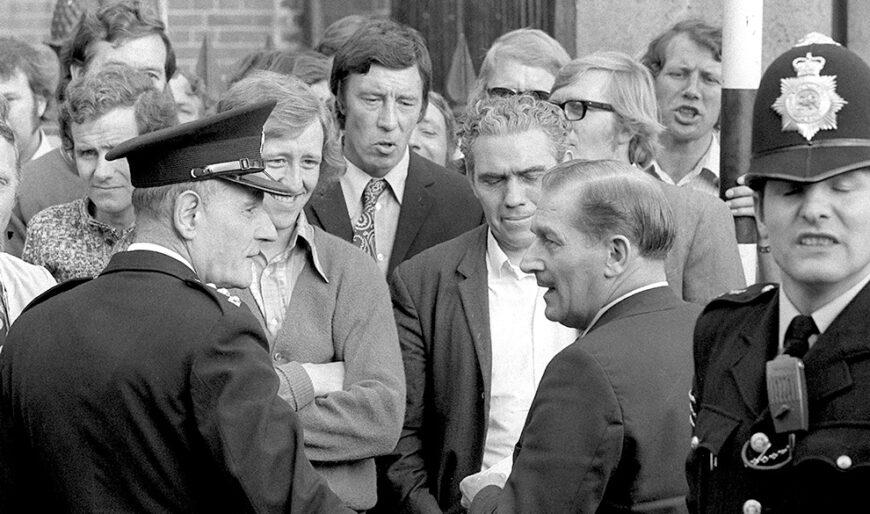 As the struggle of the ‘Pentonville Five’ some 50 years ago is commemorated tonight at East Ham Town Hall, it is a timely reminder that British trade unions have never been free:  they have always been treated with suspicion, and they have always operated in the shadow of the criminal law, penal sanctions, and the watchful eye of the State. Suspicion has been tailored into our law since time immemorial, and remains there to this day.

That suspicion has periodically turned to hostility and oppression as trade unions have challenged the authority of the State by protecting their members’ interests in the face of government injustice.   Classic examples from the 20th century include the striking Glasgow munitions’ workers, who were not only convicted in 1916 under war-time legislation, but were the victims of internal exile under the same legislation, banished from the city and separated from their families.

They also include the miners who in 1926 stood up to the Baldwin government, and who as a result were subjected to what otherwise cautious Labour politicians referred to as the introduction of ‘martial law’ in the coalfields, while others detected an ‘extraordinary drift’ towards a ‘police state’.  This was imposed by Emergency Regulations which operated for the best part of six months, creating new offences without proper parliamentary scrutiny, and giving extensive new powers to the police.

To these we may add a fresh round of emergency powers during the second world war which saw 1,000 Kent miners convicted and their leaders jailed with hard labour in 1942.   Although counter-productive, these powers were retained by the Attlee government, which used them albeit unsuccessfully against dockers in 1951. Attlee’s government had, however, previously secured the conviction of striking gas workers, and was actively looking for seditious conspiracy by unofficial strikers at a time of Cold war paranoia.

And so it goes on, with the jailing in July 1972 of five London dockers – Conny Clancy, Tony Merrick, Bernie Steer, Vic Turner and Derek Watkins.  They were done for contempt of court, which although not a criminal offence in these circumstances, nevertheless can have penal consequences.   It was said that the five had refused to obey a court order made under the Industrial Relations Act 1971, as a result of which they spent five nights at Her Majesty’s pleasure in Pentonville prison until a mass popular campaign forced their release.

A year later the guiding hand of the State was clearly visible in the case of the Shrewsbury pickets, the trial of whom saw charges of conspiracy to intimidate, unlawful assembly and affray, leading to sentences on conviction of up to three and two years in the cases of Des Warren and Ricky Tomlinson respectively.   It has taken almost 40 years of prodigious work to unearth the full extent of the State’s collusion (going all the way to No 10), and for convictions to be overturned.

Re-invoking Cold war rhetoric a decade later, the NUM, its members, their families, and the wider coal-mining communities were seen famously as the ‘enemy within’ and dealt with accordingly. In Scotland, the political prosecution of striking miners has at last been recognised by pardons to be granted following the Miners’ Strike Pardon (Scotland) Bill 2022, a welcome first step, but one which falls short of what is required. Legislation should apply to a wider range of offences, and victims should be compensated.

The roll call goes on, with others jailed for their trade union activities, even though they too had not committed an offence.  Notable here is a group of Birkenhead shipyard workers who, facing redundancy, occupied a gas accommodation rig and a Royal Naval frigate being built at the yard. In 1984 just as the miner’s strike was kicking off (though unrelated to it) the shipyard workers were also done for contempt of court, and for four weeks ‘held in isolation, locked down for 23 hours a day in a top security wing of the prison.

That’s not the half of it: we are reminded of the State’s continuing interference with trade union freedom by the current Spycops inquiry and the relationship between State officials and employers.  We have known for years that trade unions have been the subject of intense surveillance and infiltration by the Security Services, in the latter case at the highest levels in the Movement. Indeed, Foreign Office files reveal an unhealthy relationship between the TUC and MI5 in the early days of the Cold war.

Yet as we recall the sacrifices made in the past, we may also be looking at the future. The economic circumstances and the trajectory of the current government seems destined to take us into some dark places in which trade union and trade unionists may be drawn into renewed conflict with the State.  While the jailing of the Pentonville Five reminds us of the dangers, their dignity and unrepentance are inspiring, just as the campaign for their release reminds us of the power of solidarity and the potency of popular protest.