Shadow Minister for Labour, Laura Pidcock, gave an inspiring speech at the Institute of Employment Rights' (IER) fringe meeting on the eve of the Durham Gala – all while holding her baby. 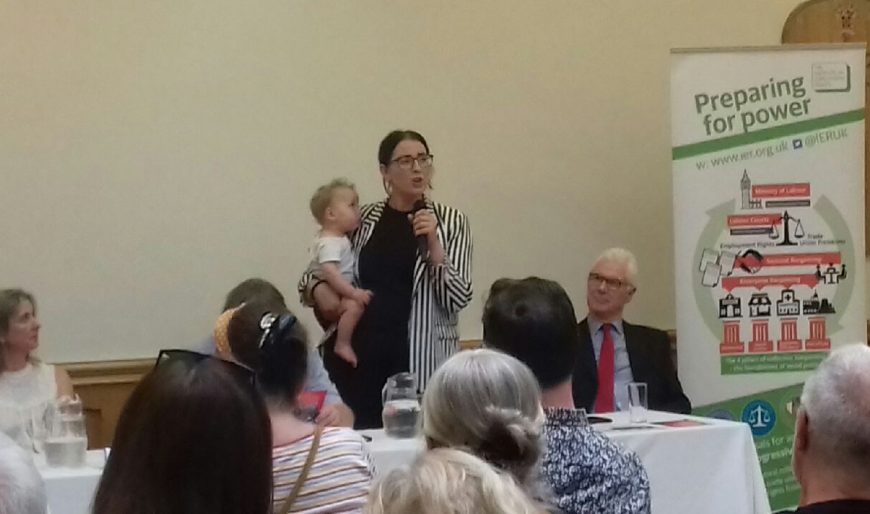 While soothing her child, Pidcock confirmed that the Labour Party would legislate for stronger trade union and employment rights based on recommendations made in the IER’s Manifesto for Labour Law.

The Labour Party has been consulting with the IER on how best to improve workers’ protections and has previously announced its commitment to implementing our proposals for the establishment of a Ministry of Labour, the reinstatement of collective bargaining, the raising of the National Minimum Wage to a Real Living Wage, and a universal status of ‘workers’ that would provide every person in employment with the full suite of rights from day one.

John Hendy QC, Chair of the IER and lead co-author of the Manifesto for Labour Law, told the meeting provisions for sectoral collective bargaining would have an important stimulating effect on the economy.

Collective bargaining has proven itself to be the best way to raise and maintain wages and conditions. With extra money in their pockets, workers will have more disposable income to spend, thereby increasing demand for UK businesses.

This demand will create a virtuous cycle of wealth that allows employers to create new jobs – jobs which would also fall under the auspices of a sectoral collective agreement and therefore share high wages and conditions.

As a greater proportion of workers enter high-quality work, fewer will be forced to rely on state benefits to top-up poor wages, while tax receipts will increase. In this way, the net balance of the public purse will rise, providing better funding for public services.

Pidcock and Hendy were joined on stage by Adrian Weir, Chief of Staff for Unite the Union, who broached the increasingly urgent issue of free trade deals.

After Brexit, the UK will begin seeking free trade agreements with countries across the globe, but Weir warned that a deal with the US is likely to be the main goal of Trade Secretary, Liam Fox.

Due to the fact US regulations on health and safety, trade union rights and food safety are weaker than those in the UK, any such agreement would put pressure on the UK to compete with companies that undercut them through lax working practices.

As a result, Weir warned the UK may cave in to US pressure to weaken standards, thereby diluting workers’ rights, and that it is probable an Investor State Dispute Settlement (ISDS) court will be created with the ability to take action against the government if policy is deemed discriminatory to US business.

Finally, Lydia Hayes, Cardiff University law expert, told the meeting about the recent success of the IER’s recommendations in Wales.

First Minister Mark Drakeford announced last week that his government would implement a Social Partnerships Bill based on the latest report by the Fair Work Commission, which is informed – in part – by the Manifesto for Labour Law.

The Bill will promote collective bargaining, tighten public sector procurement rules to reward employers who provide fair work, enact Section 1 of the Equality Act 2010 (which imposes a duty on the public sector to take steps to reduce socioeconomic inequality), establish a government department to oversee fair work, and improve enforcement and monitoring of labour law compliance.

Click here for more on the Manifesto for Labour Law