Home > News > Chris’ story: “To the people in charge now, I’m nothing but a bum wiper”

Chris’ story: “To the people in charge now, I’m nothing but a bum wiper”

Chris, a care worker for people with learning disabilities, who has been in the industry for three decades and has seen it move hands from the public to private sectors, spoke to the IER about his experiences. 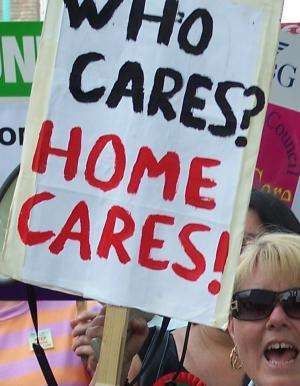 Read below about what working life has been like for Chris and his colleagues and how implementing the IER’s recommendations in Rolling out the Manifesto for Labour Law could make our society fairer.

I’ve worked supporting people with learning disabilities for over 30 years. It takes a certain kind of personality – a giving sort – to take responsibility for another person’s welfare on such a low wage. You don’t want to leave those you care for stranded just because it’s time to clock off so we go the extra mile, but we don’t get paid when we do. Since care work shifted to the private sector in the mid-90s, things have changed for the worse. Once upon a time, I was treated as a skilled professional, but to the people in charge now, I’m nothing but a bum wiper.

So let me tell you a little bit about what this “bum wiper” does. I am personally liable for the wellbeing of people in my care – I bathe them, clean for them, take them shopping and to their appointments, I sort out their medications (enemas, sometimes), their bills, I provide comfort and support. Because some of the people I work with have behavioural difficulties, I have been spat at, bitten, sworn at and hit. If anything goes wrong, it’s on me – I can even face prosecution if it’s a medication mistake, even if I’ve worked over 100 hours that week and have barely slept; even if I was paid as little as £3 an hour for doing so.

Yes – £3 – well below the National Minimum Wage. That’s the amount I’m paid when I do a ‘sleep-in’ at a service user’s home. But you can’t sleep when you know that if you miss one thing, the service user could get hurt. But apparently lying awake, away from your family doesn’t count as working, so even though we’re still personally liable for whatever happens in the night, we’re not eligible for the National Minimum Wage.

My generation are qualified, experienced and highly skilled. But now we’re leaving the sector in droves. We’re burned out, stressed, struggling to survive on wages that stagnated years ago. The young people they’re hiring to replace us don’t get the training we did. There’s no hands-on instruction anymore, it’s just an online course. But if a service user has a medical emergency, they sometimes only have minutes to administer life-saving medication. Young carers can’t believe another person’s life is in their hands. A lot of them quit. I don’t blame them. They can earn more at McDonalds, where they’re allowed to go home to sleep, and if they make a mistake, no one dies.

But the high turnover of staff is a disaster for the people we care for. Imagine having to trust a constant stream of strangers with your personal care. All our marketing material says we’re “person-centred”, we’re all about the “wellbeing” of our service users. But as soon as an opportunity for cost-cutting comes up, all that goes straight out of the window.

All we’re asking for is to be treated with dignity and respect. For someone to notice all this hard work we put in and reward us for it. ”