Britain is undergoing rapid and potentially damaging political change, for workers and unions these are challenging times. 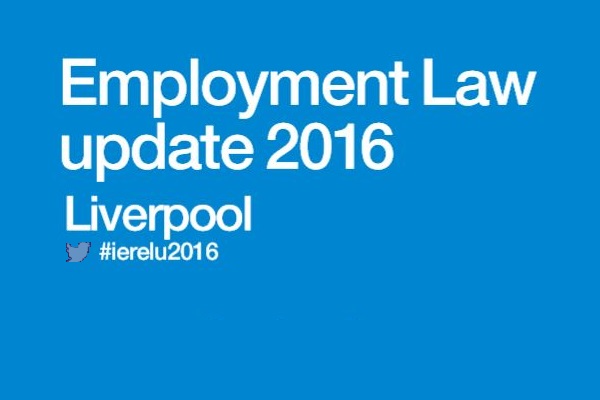 Carolyn Jones, director of IER, opened the employment law update with a stark message: Britain is undergoing rapid and potentially damaging political change. Not only are we governed by a Conservative Party that’s completely indifferent to trade union concerns, we’ve also had Brexit, further devolution for Scotland and the election of Donald Trump in America. For workers and unions these are challenging times.

A recent IFS report shows that British people face an upcoming decade of lost wage growth, and that our earnings in 2021 will be no higher than in 2008. This represents the worst period for pay in at least 70 years. Job insecurity is being normalised, and more than one-in-five workers, 7.1 million people, now face precarious employment conditions, which, compared to a figure of 1.8 million in 2006, represents an astonishing decline in secure employment.

This is a key area where workers are being squeezed out of access to justice, as the onerous effect of tribunal fees push people away from the courts. Indeed, Doyle said there’s been a 70 percent decline in case load as a result, although the service is still busy. As “smaller” cases are being forced out, they are increasingly dealing with cases backed by significant financial resources or cases in huge principles are at stake, such as the recent ruling that Uber drivers are employees not “self-employed”. This trend highlights the importance of unions. Workers won’t get a hearing unless they’ve got the unions’ legal and financial muscle behind them.

Faced with these problems, judges have tried to adapt to the changing environment. “Case management” processes try to focus cases by limiting the number of issues, documents, and witnesses; establishing what is in dispute; and setting a timetable for the hearing. But these also pose problems. Bad employment practices are being swept under the carpet, as there’s no public hearing and there’s no tribunal report produced. It’s also tougher to set precedents out of cases.

From the floor, PCS officers from Scotland noted the devolution of Employment Tribunals. It’s certainly good news for workers and unions that tribunal fees are likely to be scrapped in Scotland. This will be a boon for justice and workers’ rights in Scotland, if implemented. However, one of the main problems in devolving the tribunals are proposals to essentially downgrade the status of the tribunal. Instead of being adjudicated by judges, they will possibly be adjudicated by “legal” members. Negotiations are continuing.

Responding to other contributions, Judge Doyle raised the idea outlined in the IER’s manifesto for worker’s rights which calls for a “labour inspectorate”. These labour inspectors would have powers to act on behalf of workers facing discrimination or harassment from their employers. Under the proposals, all dismissals aimed at workplace reps would be illegal without the approval of an inspector. This would be a major victory for Freedom of Association and collective rights at work.

Progress has stalled, and the gender pay gap remained unchanged last year. Government estimates say it will take 44 years before the gap is eradicated. However, more in-depth studies advise that, on current projections, it will take 170 years for men and women’s pay to harmonise. Gender segregation, full-time wage bias, maternity and structural expectations around home and family negatively impact on women’s pay.

The government’s new Gender Pay Gap Information regulations lack application and substance, Jo said. Only about 10 percent of private sector companies will be forced to publish information, since the regulations only apply to companies with 250 plus employees. There’s no obligation on the employer to share the information with employees or trade unions nor to develop plans to reduce or remove the gap.

In Scotland, laws compel public authorities with 20 or more employees to publish data on the gender pay gap and on occupational segregation. However, sadly, since its introduction, fewer employers are following through on their obligations.

So can publishing gender pay gap information lead to fair pay? No. Only trade unions can do that, Seery emphasised. The task, therefore, to understand how can unions use the a) gender pay information available and/or b) equal pay legislation in order to strengthen sectoral collective bargaining.

As the course was underway, the government passed its controversial Investigatory Powers Bill. This new law allows a huge range of government agencies to force internet companies to give up their users’ full browsing history. It also gives security agencies unprecedented powers to read people’s messages, and forces technology companies to hack into their users’ phones on demand, which of course has implications for trade unionists, as one of the things previously dropped from the Trade Union Bill before it became the 2016 Act was covert surveillance of strikers mobile communications.

It was therefore apt that Paul Scholey’s third session looked at Surveillance in the Workplace.

He referred to Article 8 of the European Convention on Human Rights – the right to privacy – and reminded delegates that this is a qualified right. Recent cases both in Europe and here in the UK have illustrated that reliance upon the Article is not always successful in cases against employers.

Cases on internet use referred to by Paul demonstrated the importance put on employers ensuring that employees know the policy and that it is clear.

Companies are increasingly using CCTV, social media accounts and electronic monitoring to keep track of their workers. Although in theory these practices are regulated, in practice the law gives significant scope for “snooping” employers.

Under the Code, employers should tell employees what their policy is and how and when it can be used. The Code also requires employers to make this policy clear at induction. The Regulatory Investigatory Powers Act (RIPA) 2000, which covers emails and telephone calls, made it illegal to intercept but the Regulations which have followed actually allow interception in most cases where employers want to. This has largely been thanks to the business lobby.

Paul then turned to ‘the power to collect bulk data’ provided by the Investigatory Powers (IPB) Bill 2016. He pointed out that access to protections appear to be few, that warrants require ministerial authorisation, and that there will be a new information commission.

Finally, Paul turned to the new EU General Data Protection Regulations (GDPR) which come into force in May 2018 and introduce some welcome changes to protection for individuals.

Sally Brett, TUC ‘’Equality law: the implications of Brexit and priorities for unions’

Sally addressed how Brexit would affect equality issues in workplaces. Even before Brexit, employers had used the recession to put the brakes on equality for so-called “financial reasons”.

The TUC have noted that EU law gives provisions for equality in workplaces. The European Court of Justice has been particularly helpful in correcting decisions of UK domestic courts in discrimination cases, and without it, the UK courts have a tendency to only address “direct” rather than “indirect” discrimination.

The upcoming Great Repeal Bill will include powers enabling government to review and revise all EU sources of law. It’s crucial that workers should not suffer for Brexit through the weakening of equality legislation designed to protect women, minorities and disabled people.

The most substantial issue raised by Brexit is how the General Data Protection Regulation law will be implemented. The GDPR is a response to the growth in the collection and sharing of personal data: it must be transposed into national member states by May 2018 to provide a more robust framework on data protection.

In the context of Brexit, it’s important to consider UK business’ relationship with EU consumers: in order to share information and provide services, our laws will have to be equivalent. This is likely to be a requirement of single market membership, if the government decide to pursue it. Due to the timelines of the Great Repeal Act and GDPR implementation, whether or not the GDPR legislation is upheld or replaced will most likely depend on political will.

Despite the obvious difficulties facing trade unions right now, there are clearly opportunities in this time of great change. Our priorities remain intact: we need to build a strong and active movement that can hold government and institutions to account and act in working people’s interests. By strengthening collective bargaining using the recommendations of the IER Manifesto for labour law, using legislation, case law and employer information, we can start the battle to improve workers’ rights today.