Social rights aren't just morally just, they could save us from economic catastrophe.

Senior Lecturer at the School of Law, King’s College

The Coronavirus has triggered a stock market crash sharper and faster than the global financial crisis. It threatens a depression unless we move aggressively to protect social rights.

Companies with plummeting share prices, or evaporating customers, are prone to individually rational, but socially irrational, herd behaviour. They lose confidence and fire workers. Workers lose income, and spend less on goods and services. This means companies lose more customers. They fire more workers. This is the sinking spiral of every depression.

It requires social rights – social security, voice at work, job security, State aid – to halt this short-term herd behaviour, and spread losses to those who can best bear them. We know our health and emergency workers will do everything to save lives, and – with the right health response – the pandemic can be contained in around three months. But we must also stop the Corona crash becoming a depression, with social rights.

Here’s ten that we can boost right now, all without primary legislation.

Every employee already has the right to work at home to avoid any ‘danger’ of the virus at work that is ‘serious and imminent’. Employees who refuse to go to work can be subject to no ‘detriment’: no pay cuts, no dismissal. Employees also have the right to a ‘reasonable amount of time off’ for child care, and to care for parents. But the government should publicise these rights, and ensure pregnant workers and carers suffer no detriment, to protect jobs and lives.

Two – extend rights to everyone who works

The government should extend these rights to everyone who personally performs work, whether their contract says they are ‘self-employed’, an ‘independent contractor’ or an employee. Sham self-employment is a huge problem in the UK, and across the ‘gig economy’, where people lack bargaining power. Employers like Uber or Deliveroo misrepresent worker status to evade social rights and tax.

The Secretary of State can extend the scope of employment rights to everyone by order, and say that this expanded definition of an ‘employee’ goes for all tax and social security rights.

Statutory sick pay is the most important social security right now. But in the UK this is only £94.25 a week since March 2019. Instead of the planned rise to £95.85, it should replace people’s full income up to a reasonable cap: Sweden’s cap is around £600 a week. Unemployment insurance and Universal Credit should rise too, because the economy is only strong if everyone has a fair income.

Many employers will ask workers to take holidays if customers dry up. In the UK and every EU country there is a right to at least 28 days or four weeks’ paid holidays. The right to paid holidays – which is a universal human right – gives employers and workers more flexibility, especially in a crisis.

The European Social Charter 1961, which the UK has also ratified, requires States to take action for ‘the working week to be progressively reduced to the extent that the increase of productivity and other relevant factors permit’. The Secretary of State should raise the right to paid holidays for more flexibility.

Five – give workers a voice 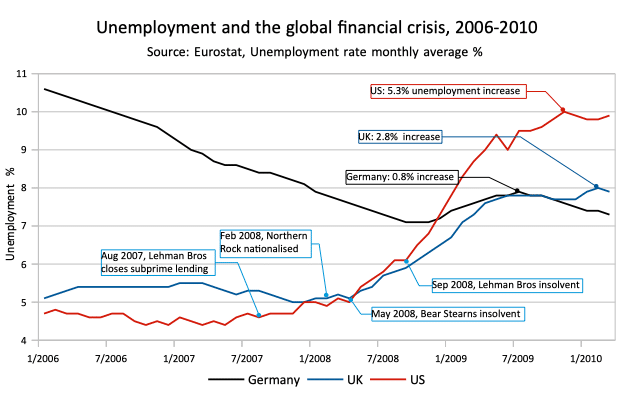 Ironically, the UK and US helped write Germany’s post-WW2 work council law after Hitler had abolished it (p.31 here).

We can create this right to a voice at work now with a new ACAS Code on redundancy procedure.

Dismissal decisions begin on company boards. But votes for directors are monopolised by shareholders that are prone to irrational short-termism. We know that workplaces are more innovative, have fewer strikes, and are more productive when workers have the right to vote for directors.

Britain is way behind, even though a Conservative Minister for Transport was advocating for workers on railway company boards in 1920, Churchill himself put one on the Port of London Authority (pp.9-13 here), and Oxford University has had worker votes since 1854.

At the least, all government subsidies should be conditional on companies changing their constitutions to have a minimum of two elected worker-directors. We could do this for all listed companies by updating the UK Corporate Governance Code.

Seven – give workers a say in how their pension is invested

Irrational herd behaviour occurs in stock markets because the decision-makers are a tiny group of asset managers, like BlackRock, State Street, or Vanguard. They manage and vote on ‘other people’s money’, and are unaccountable for short-term decision-making. In the US, the top three asset managers combined would be the biggest shareholder in 438 out of the 500 largest companies, and they have around 50 people casting votes that control the economy.

They have a record of supporting directors who fire workers en masse. Their power should be removed, and the people who save for retirement in pension, life insurance and mutual funds should have that voting power, like the Swiss. The Secretary of State can amend our pension laws to ensure at least one half of our trustees are elected, and clarify the FCA Handbook on conflicts of interest to prevent asset managers voting on other people’s money without instructions.

Eight – rights from day one

We should expressly extend job security rights to everyone from day one on the job. Everyone should have the right to not be unfairly dismissed, or made redundant. At the moment in the UK, this right only kicks in after two years. In the US, there is no right at all.

The Secretary of State can change it now.

Nine – make the government say how it plans to raise employment

We should restore the duty on government to say how it will attain ‘full employment’. The UK had this in the Welfare Reform and Work Act 2016, until it expired when Theresa May triggered an early election.

Full employment means the right to work ‘at fair wages’ with the hours one needs: not under-employment on zero-hours contracts. It means unemployment below 2%. It actually costs the taxpayer nothing because government saying it will do ‘whatever it takes ’ is enough to keep confidence up.

Ten – a pause on rent, mortgages and debt repayments

Direct wage subsidies, like the Employment Subsidies Act that Thatcher renewed eight times, or like Denmark’s guarantee of 75% of employee wages, put money in people’s pockets and maintain confidence even more effectively than giving businesses £330 billion in guarantees. But people also depend on banks and landlords.

Loan repayments to banks, mortgage repayments, and rent payments should all be capable of being cancelled until this crisis is over. Banks crashed the economy, and were bailed out before, and so they must exercise responsibility in this crisis.

The government has the power to order this in the Civil Contingencies Act 2004. Nobody must lose their home because of the Coronavirus.

With the global financial crisis, its causes, and its culprits in recent memory, we know what works and what does not today. Social rights work: to ensure employers, banks, and government protect everyone from a new Corona depression. We could even come out stronger.

Dr Ewan McGaughey is a senior lecturer at the School of Law, King’s College, London, and a research associate at... Read more »

END_OF_DOCUMENT_TOKEN_TO_BE_REPLACED

Laid bare: The scandal of expendable workers before, during and after Covid

Five key issues for unions to take to Starmer talks