The role of corporate law is too often missed in trade union critiques of modern-day capitalism, but its impact on workers' rights is enormous.

No matter how much the world of work changes, and no matter how precarious and ‘flexible’ the workplace becomes, there are three basic things that remain constant. First, profits are created because people work. Whether we are talking about the production and growing of things, or transportation, or providing services, value is produced by a combination of workers’ effort and time and skills. Second, most of this value ends up in the hands of a minority, and this minority has a preferred mechanism that it uses to funnel its profits. This mechanism is called the corporation. Third, the profits are then either reinvested back into the same corporation, or into other corporations, in the form of bank savings, financial investments and diversified share-holdings. You don’t need to be a dyed-in-the-wool Marxist to see the world this way; those are the very basic hard and fast rules of capitalism: workers generate profits and the largest proportion of those profits end up in the hands of a minority who use corporations to generate more profits.

However, the role of the corporation in the labour process is a role that is all too often ignored in socialist critiques of capitalism and in trade union campaigns for labour rights.

Yet it is clear from recent events that the design of the corporation – its legal architecture – can leave workers increasingly vulnerable. Two large contractors that recently went into administration – Carillion and Interserve – were both in the spotlight because of their corporate structures and the accounting models they used. Workers suffered significant losses from those collapses. When Philip Green restructured BHS to avoid liability for paying out on his employees’ pensions, public attention focused on the complex, offshored, ownership structure that allowed him to do that. Ultimately, the public and political debate ended with a personal attack on him, stopping short of an attack upon the complex system of corporate laws that allow him to profit from the spiraling decline of his employees’ pension pot. 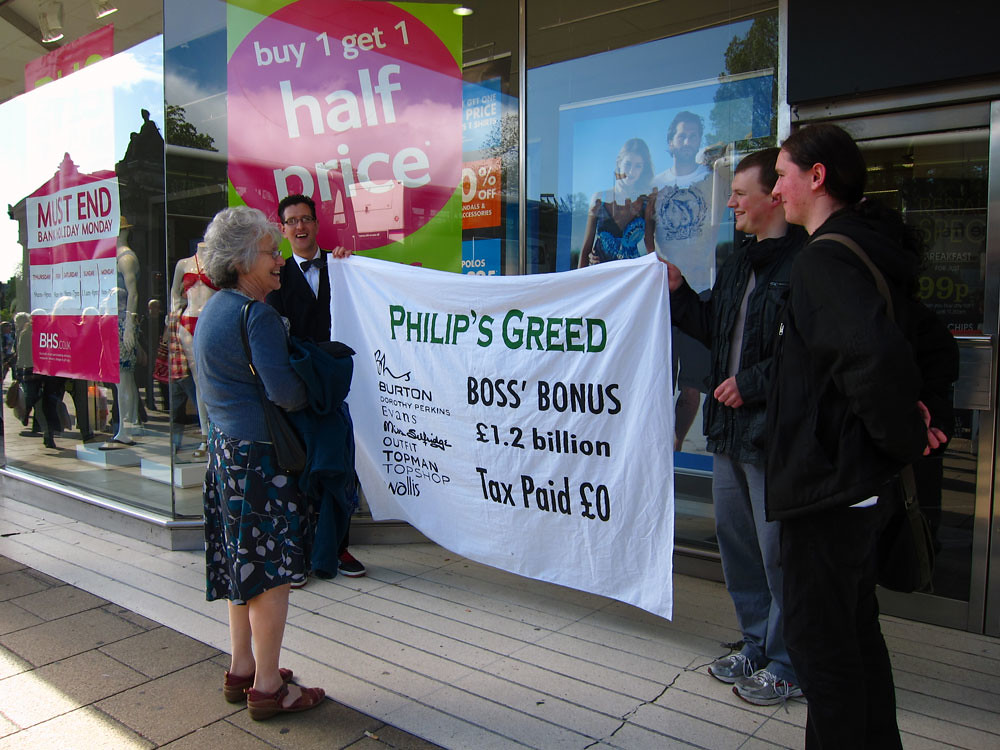 Since the BHS scandal there have been a number of other cases of predatory asset stripping that has victimised workers, not least the recent events that led to the devaluing of British Steel pensions. Yet, asset stripping is by no means the only process through which corporate law is able to eradicate employment rights.  Corporate law overshadows and shapes every aspect of the employment relationship.

Behind the corporate veil

When a corporation is your employer, the anonymous people who profit the most from the corporation – the shareholders and its executives – are effectively distanced from the employment relationship. It is only in the rarest of circumstances that either shareholders or executives will be held directly responsible for any liabilities that arise from employment. If workers are killed or made ill, and if any compensation is owed to them, it will be the corporation that is made to pay; if there is legal action taken by the workers to recover damages, it will be the corporation that is sued. Even if the corporation is made to pay a proportion of those costs, shareholders will ultimately be protected by the corporate law principle of limited liability: they will not be liable to make any payment. No matter what happens, all they risk is the declining value of their shares. It is only very rarely that directors end up in the dock, normally only in cases involving the most serious criminal offences, and normally only in cases involving small companies. Lawyers call this invisible partition which ensures immunity for shareholders and directors the ‘corporate veil’.

The corporate veil works well for corporate shareholders at a global level.  Transnational corporations are invariably based on a complex chain of subsidiaries or sister firms. In effect, corporations are permitted to do what no citizen can do: they create multiple nationalities by basing themselves in several different countries simultaneously. Corporations can therefore act under a multitude of split personalities that enables them to diversify their assets across any number of different identities and locations. The advantages of multiple-and split-personhood extend into everything the corporation does. Corporations are often structured in this way to avoid taxes, but an equally important advantage is that it can also avoid any liabilities when things go wrong.

Passing the buck in times of crisis

Union Carbide was the corporation responsible for the 1984 Bhopal chemical leak in India that killed 20-30,000 people. For almost 20 years, the US parent company successfully denied liability by deflecting the blame onto its Indian subsidiary. Yet since the company was acquired by Dow Chemical in 2001, the new parent company has refused to pay any of the the medical costs and the costs of the clean-up in Bhopal. Dow Chemical has said that Union Carbide remains a separate entity, and therefore: “under well-established principles of corporate law, both in India and the United States, TDCC did not assume UCC’s liabilities as part of the 2001 transaction”. So far, Dow’s argument has been successful in the US courts, even as more than 120,000 people are left suffering from medical conditions, some in constant pain.

When a company uses subsidiaries to employ workers, it becomes even easier for both individual shareholders and executives to avoid responsibility for subsidiaries’ unfair labour practices or for discrimination and other nefarious practices. And when this happens on an international scale, multinational and transnational corporations are very often able to make it impossible to see clearly who owes liabilities to workers. Often, this multi-national or transnational structure prevents compensation being paid by a parent company to workers employed by its subsidiary. There are exceptions to this rule, such as the case of Chandler vs Cape PLC in which a South African worker was able to pursue damages against the parent of the company that employed him. But those exceptions are rare.

There is therefore a profound and general conflict between corporate law and workers’ rights. This conflict plays out just as powerfully in our own backyard as it does internationally. Some trade unions have begun to recognise that a starting point is to organise in ways that recognise the complexity of corporate structures. For example, there are trade union strategies that seek to organise the entire supply chain to challenge corporate power. In Australia, the National Union of Workers has been developing this strategy for a number of years, trying to organise workers at every point in the chain from farm to supermarket. We see this principle occasionally in UK industrial disputes, in spite of the harsh anti-secondary picketing laws designed to undermine such strategies. In October last year, the  IWW Couriers Network called for food drivers to take action on in solidarity with McDonald’s, TGI Fridays and Wetherspoons workers on strike. As McDonalds worker Lauren McCourt put it “its about time the workers who made the food and the workers who deliver the food come together to fight together”.

Those strategies begin with an understanding of the way that corporate law works.  But as trade unionists we need to see this as a starting point and recognise that in the long term we need to organise a comprehensive challenge to corporate law that is capable of piercing the corporate veil. This means that we need to begin a discussion in the trade union movement that explores the ways we can challenge and dismantle the structural privileges enshrined in corporate law. Otherwise, shareholders and investors will continue to deploy the exceptional privileges granted to them by corporate law to eradicate workers’ rights.

END_OF_DOCUMENT_TOKEN_TO_BE_REPLACED

Outsourcing on the ‘never-never’

IER welcomes proposed compensation scheme for blacklisted workers; but this is not even the beginning of the end