As Johnson leaves the stage, workers must resist the clampdown on trade union activity

Improvements will need to be fought for, and no successor is likely to make that fight any easier. 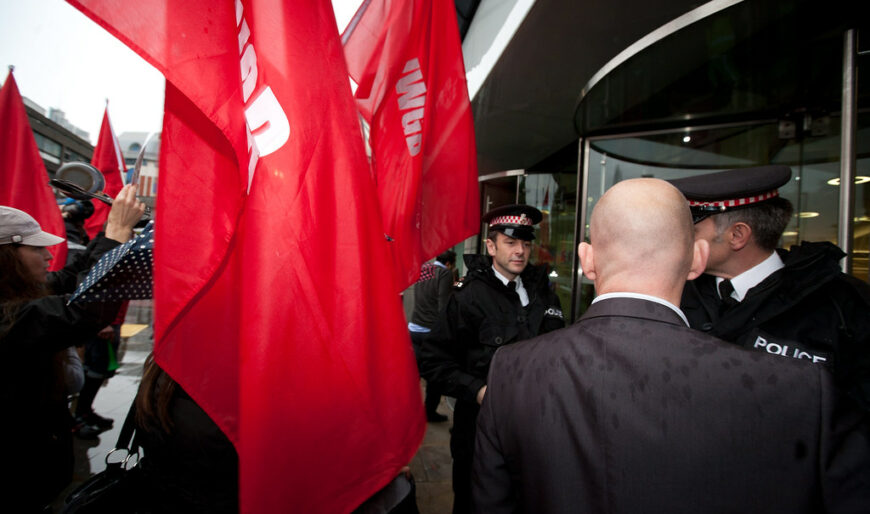 Trade unionists can be forgiven if they were momentarily distracted last week. Amidst a ‘summer of discontent’, in the aftermath of nationwide rail strikes and with more on the horizon, the dramatic unravelling of Boris Johnson’s premiership across three days of resignations, negotiations and backstage manoeuvring understandably dominated headlines. But while Johnson’s immediate future still hangs in the balance, Britain’s workers can be sure of theirs: improvements will need to be fought for, and no successor is likely to make that fight any easier.

Just days before Johnson’s announcement, on 28th June, the Police, Crime, Sentencing and Courts Act proposed by his government came into force across the country (although it should be noted that not all of its provisions apply to Scotland and Northern Ireland). Less than a week prior to that, the government published plans for legal changes that would allow businesses to draft in agency workers in place of striking employees. And throughout the RMT’s three-day strike action in June, politicians of all stripes provided a regular drumbeat of opposition on TV screens and on the pages of newspapers.

The Police, Crime, Sentencing and Courts Act 2022 (PCSC Act) has most extensively been discussed in relation to protest groups like Extinction Rebellion and movements such as Black Lives Matter, both explicitly referred to in government material relating to the Act. The Act’s contents expand the powers of both the Home Secretary to define ‘serious disruption’ in relation to protest, and the police to impose conditions on such protest. A new statutory public nuisance offence is also established, far broader in scope than any preceding legislation. While these reforms clearly threaten the actions of protest groups, they also have worrying implications for trade unions.

At first glance, it may seem like the right to strike, and specifically to picket, could be under threat. By their very nature, pickets are often noisy, disruptive and inclusive of many features of protest. But picketing is already a heavily restricted activity; legislation governs the organisation, supervision, remit and size of picket lines, and powers already exist to further restrict these on the basis of public order. While it is of course possible that the new powers could be used to break up picket lines, in practice those powers already exist. Rather, this legislation seeks to impose a similar level of restriction on other forms of collective action.

Where the Act presents the biggest threat to union activities is likely to be in cases of direct action, increasingly used as a form of leverage in union disputes. Particularly popular amongst newer, grassroots unions like the Independent Workers of Great Britain (IWGB) and United Voices of the World (UVW), unions across the labour movement make use of these tactics, perhaps most notably at branch level where, for example, single employers may be targeted by protests outside premises which seek to shame them into action or alert customers of their practices.

In the cases of IWBG and UVW, each set up in part to organise precarious workers who do not have employee status, these forms of action become even more important in asserting collective power in the absence of official strikes, union recognition or collective bargaining. In this way, the Act presents the greatest threat to unions at the grassroots and branch levels, where direct action is most widely leveraged but access to legal support is often at its thinnest.

That the Act also hands police forces increased discretion in deciding how to police such actions should similarly be understood as a potential threat to union activity. The policing of union activity has included, throughout recent history, violence, infiltration and the enforcement of ever-expanding draconian anti-union laws. But it has also included the arguably incorrect application of such laws, for example in the breaking up of legal picket lines or the arrest of striking workers or union representatives. Trade unionists could not trust the police to correctly or fairly enforce the law, even before its most recent expansion.

Taken in its wider context, alongside plans to replace striking workers with agency staff and the hostile response to RMT strikes from politicians, the Police, Crime, Sentencing and Courts Act should be understood as a further clamping down on union activity, particularly at the grassroots and local level. This will remain true whoever wins the current Conservative leadership election and becomes the next Prime Minister; powerful protest movements are not in the interests of governments precisely because they are effective. It remains essential for unions, then, to join forces with protest groups similarly attacked by such legislation to do as they always have done, and act collectively to force change.

Eve has won ‘Write to End Violence Against Women’ awards for her coverage of gender-based violence, was named in Young... Read more »