A one-day conference organised by the Institute of Employment Rights on the topic of Health and Safety in the workplace. 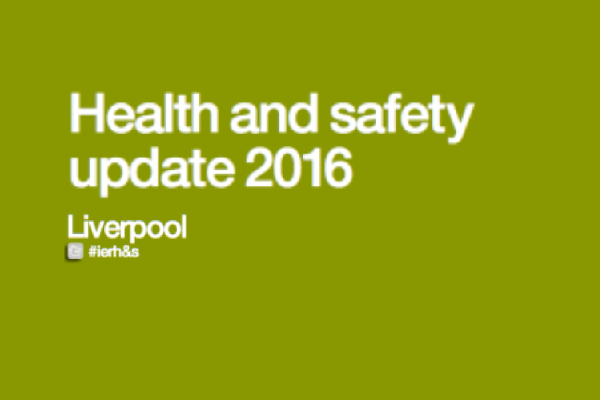 The Institute of Employment Rights (IER) has for many years been at the forefront of forward thinking regarding UK employment rights or quite often the lack of rights. Once again the IER put together a mix of trade union, academic, legal and campaigners that gave the delegates challenging and informative food for thought. Carolyn Jones, chairing the conference gave an excellent overview of the topic for today: health & Safety update and also introduced the IER’s Manifesto for Labour Law. There were 7 speakers providing a wide range of talking points.

Robert gave an overview of the relationship between the HSE and trade unions stating that trade unions were the HSE’s best friend but also its biggest critic. Highlighting the rapid decline in HSE intervention, activity and inspections due to continuous government cuts in funding. However, the HSE could be said to be its own worst enemy as Robert explained ‘if you are good at making cuts then the government will continue to come back to you for more’. The HSE has also failed to take action to protect trade union safety representatives. Fee for Intervention (FFI) has proved to be like putting ‘a fox in charge of the hen house’ with HSE now hooked on this funding. Robert used a Unison case study regarding managing and preventing sharps injuries to highlight how a proactive approach to working with the HSE could pay dividends for the members. He concluded that trade unions need to actively engage with the HSE to secure better health & safety for our members.

The main focus of Susan’s presentation was asbestos. Due to corporate greed and negligence it took around a century to ban asbestos in the UK. There is a common misconception amongst members that as asbestos is now banned in the UK then there is not a health risk anymore. There is a need to raise member’s awareness. Susan went on to highlight areas that trade unions are currently involved in: the asbestos in schools group which has ten trade unions forming the Joint Union Asbestos committee (JUAC). Apart from the dangers associated with building work etc an example was given that teachers in schools using World War 2 gas masks as learning props could be subjecting pupils and themselves to asbestos exposure.

Phillip, from Thompson’s solicitors gave an informative presentation on the government’s proposed changes to small claims limits, proposals aimed initially at road accidents but which also look at personal injury cases. If passed the current limit of £1,000 would be raised to £5,000 meaning that cases would have to be worth over £5,000 or accident victim will be liable for all court costs. As an example Phil noted that a punctured lung is estimated at less than £5,000. The insurance companies unsurprisingly are misleading the public and the changes are a further attack on access to justice for not only trade union members but everyone. With the profits of insurance companies soaring this is completely unnecessary and Phil warned it will lead to a proliferation of compensation culture lawyers which he called moving from PPI to PI! Phillip provided thought provoking statistics and urged people to join the fight against the proposed changes, providing information on how to go about this (see final PPT slide).

Hilda Palmer, Hazards: Will we have health, safety & justice at work in 2020?

Hilda is always a passionate and articulate advocate for health and safety and did not disappoint today. Hilda began by highlighting the work done by Greater Manchester Hazards Centre and introduced Janet Newsham who will be taking over the reins from Hilda (not an easy task). There is a relaunch of the Safety reps Network this Thursday in the unite building. Hilda stated that for the past 200 years, health & safety standards for workers had seen a gradual improvement, however under the present government we have seen workplace deaths and illness plateau out and were now increasing. Bad work is bad for your health and red tape is better than bandages: cuts in health & safety regulation leads to increased deaths, injuries and illnesses. Multiple fatal accidents are on the increase and several examples were given. Hilda concluded by saying “Health & safety is a life and death story and unions must work at every level and we must say we are not f****g having it” Not like Hilda to swear!

Steve began his session by taking us back to 1997, the election of the Tony Blair government and the slogan “things can only get better”! He highlighted subsequent moves towards less regulation of health and safety disguised as ‘better regulation’. Health and safety since 2010 with firstly the ConDem government then the Tory government has become an item of political hatred. Steve gave a statistical view of how cuts to health and safety enforcement have impacted for example Liverpool City Council had four Environmental Health Officers now there are none with food hygiene officers ‘keeping an eye out’. Steve provided copies of his booklet ‘Better Regulation’: better for whom? This is well worth a read.

Dave is a former construction worker blacklisted for his trade union activities. When he began work in the construction industry there were on average 3 deaths per week in his industry. In 1999 the Blair government drafted anti blacklisting legislation which was never put in place as employers claimed that the basis was just some workers with conspiracy theories. He gave a fascinating insight into his own blacklisting. A 36 page dossier on him contains every piece of trade union activity that he had undertaken and all of the places that he had worked. There are over 3000 similar files from construction trade unionists. Dave is instrumental in the Blacklisting Support Group and due to Dave and others like him the case has been taken to the European Courts as UK employment legislation does not protect agency workers; the distinction between employee and worker. The second edition of Dave’s book, Blacklisted, is now on sale.

Once again the IER have staged an excellent event and I look forward to attending the next session on Employment law update in November.

Hilda Palmer, Hazards
Will we have health, safety & justice at work in 2020?